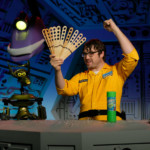 If Twitch’s Mystery Science Theater 3000 binge-fest didn’t scratch your itch, we’ve got good news for you: Netflix is renewing the show’s revival MST3K: The Return for a second season (and the 12th season overall). A brief announcement video (featuring series creator Joel Hodgson, current host Jonah Ray, and Felicia Day) hit YouTube shortly after Shout Factory’s annual Turkey Day marathon — which diehards no doubt tuned in to for Thanksgiving b-movie wisecracks. If you’re planning to make it a MST3K -themed weekend, you can still catch the 20 classic episodes stocked on Netflix. Or, maybe you’re saving a box set or two for the occasion. After all, nothing says Thanksgiving like robots sending up Space Mutiny . Source: Mystery Science Theater 3000 (YouTube)

See the original post:
‘MST3K’ will mock B movies for another season on Netflix