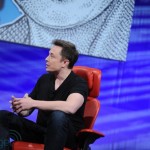 We can’t argue that the Tesla Model S is not only a great achievement in the EV industry but a looker as well, but there are still a lot of people unconvinced by the $70,000 sticker price ($60k, if you count the tax credits). CEO Elon Musk is definitely aware of that particular concern, and stated tonight at D11 that there’s a very good chance we’ll see Teslas in three years for half the price — and 20 percent smaller, to boot. Speaking with Kara Swisher and Walt Mossberg, Musk mentioned he started the company with a three-step strategy to get to mass market, with the Roadster and Model S being the first two steps. The third step, naturally, would be to offer options that are more affordable: according to Musk, “I think every major product needs at least three iterations to get to the mass market — I know cellphones have had much more than that.” While we wait for 2016-17, we’ll start saving some of our pennies, but fortunately we may not have to pinch all of them. Comments

US Army May Relax Physical Requirements To Recruit Cyber Warriors