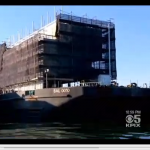 Google’s four-story shipping-container product marketing paradise. KPIX5 The mysterious Google barge discovered floating in San Francisco Bay will be used as a party space and showroom just for Google’s Glass and “other gadgets,” according to sources speaking to KPIX5 in San Francisco. The boat will be stationed near Google’s campus in Mountain View, CA and will host “invitation-only clients.” The existence of Google’s watercraft—one on the West Coast and one on the East Coast in Portland, ME—has been a topic of discussion over the past week. The barges are held under an LLC called By And Large, apparently a reference to Pixar’s “ Buy n Large ” of WALL·E, which is itself a reference to the phrase “by and large.” It is not uncommon for high-profile companies like Google to take cover under an LLC to prepare a secret project. Google filed a patent in 2009 for a floating data center, leading outlets like CNET and AllThingsD to believe that the structures might be Google’s first attempt at realizing this idea. The second theory was that the barges were going to be retail presences for Google Glass as the date of the product’s commercial launch nears. Read 2 remaining paragraphs | Comments

Google Assistant will tell your kids a bedtime story