Much of what happens in North Korea remains hidden from the outside world. But commercial satellite imagery and Google Earth mapping software are helping a human-rights organization take inventory of the worst offenses of the North Korean regime and identify sites for future investigation of crimes against humanity. A new report from the South Korea-based Transitional Justice Working Group (TJWG) —a non-governmental organization that tracks human-rights abuses and crimes against humanity by the world’s most oppressive regimes—details how the organization’s researchers used Google Earth in interviews with defectors from North Korea to identify sites associated with mass killings by the North Korean regime. Google Earth imagery was used to help witnesses to killings and mass burials orient themselves and precisely point out the locations of those events. Entitled “Mapping Crimes Against Humanity in North Korea: Mass Graves, Killing Sites and Documentary Evidence,” the report does not include the actual locations of what the researchers deemed to be sensitive sites out of concern that the North Korean regime would move evidence from those sites. But it does provide location data of other sites with potential documentary evidence of crimes, including police stations and other government facilities that may have records of atrocities. Read 5 remaining paragraphs | Comments 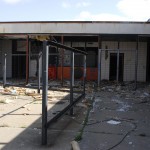 About half of Detroit can’t read