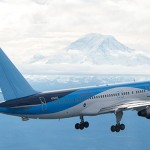 Boeing’s new ecoDemonstrator (a 757) is slated to go on a series of flights this spring to try out two of NASA’s experimental fuel-saving techniques. One of them’s the Active Flow Control Enhanced Vertical Tail Flight Experiment, which entails installing 31 tiny jets on a plane’s vertical tail or dorsal fin, as you can see below the fold. These jets can manipulate the flow of air over the tail’s surface and generate enough force to stabilize the plane during takeoff and landing, even if the fin’s around 17 percent smaller than usual. A smaller tail means a lighter plane and, hence, lower fuel consumption. A few weeks after putting the teensy jets through the wringer, ecoDemonstrator will do another series of flights to test five different insect-repellent plane coatings. Apparently, even something as small as bugs can disturb the flow of air around the plane’s wings and cause drag. Planes can reduce fuel consumption by around six percent if that air flow remains smooth. That sounds like such a small number, but it could still save airlines millions of dollars on fuel and lead to lower emissions . NASA already ensured that these two technologies work in a laboratory setting. But they still need to go through field testing to see if they can survive the harsh environments airplanes typically face. They’re only two of the eight projects being developed under the agency’s Environmentally Responsible Aviation ( ERA ) initiative, though, so expect more test flights to take to the skies after spring. [Image credit: Boeing / John D. Parker] Filed under: Transportation Comments Source: NASA