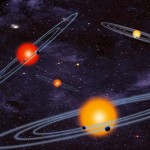 We know that it’s no longer rare to discover alien worlds, but NASA just made it downright commonplace. The space agency has confirmed the existence of 715 exoplanets discovered using the Kepler space telescope , ballooning the number of verified planets to nearly 1, 700. Scientists validated the huge number of celestial bodies by looking for targets in batches — the more objects were clustered together, the more likely it was that there would be multiple exoplanet candidates. The bonanza helps illustrate the frequency of planets among the stars, and it has also uncovered four more potentially habitable worlds. Researchers might not but much closer to finding the Holy Grail of a life-bearing planet, but they’ll at least know where to focus their attention. Filed under: Science , Alt Comments Via: Space.com Source: NASA

See original article:
NASA discovers 715 alien planets by looking for them in groups

Bic Is Trying To Make a Font Based on All the...