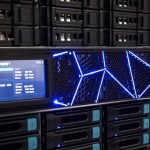 Trying to create a large-scale, private cloud array can be a headache, since it often involves bringing disparate networking, server and storage systems together in one not-so-happy union. Wouldn’t it be nice to have a box that could do most of the hard work? Nebula thinks its newly launched Nebula One controller will do the trick. The rackmount device’s Cosmos OS quickly turns ordinary servers from the likes of Dell or HP into a unified cloud computer that centers on the more universal OpenStack platform, and which can also talk to Amazon Web Services . IT admins have a single interface to oversee the whole lot while skipping any outside help, and can scale up to a hefty 1,600 processor cores, 9.4TB of memory and 2.3PB of storage. You’ll have to ask Nebula directly about pricing, although we suspect it’s counting on the classic battle between time and money to clinch a deal — the weeks saved in setup and maintenance could represent the real discount. Filed under: Desktops , Misc Comments Via: SlashGear Source: Nebula