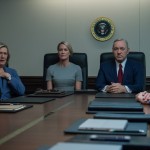 Netflix’s earnings report is out ( PDF ), and the nearly-worldwide video streaming company has seen its subscriber count creep up to 98.75 million. To close the letter to investors, execs said they expect to cross the 100 million customer barrier this weekend, as they reorganized their data to deemphasize subscriber count in favor of revenue. the company also reported that Dave Chappelle: Collection 1 is its most-viewed comedy special ever. The company also shed light on its growing plans for movie production . By Netflix’s measure, flicks like Adam Sandler’s movies and The Siege of Jadotville were successes, while Crouching Tiger Hidden Dragon: Sword of Destiny was not. As usual, it did not release any numbers, but said its formula for success is if a movie “will attract and delight members at better economics relative to licensing movies under traditional windowing.” Developing… Source: Netflix Q1 2017 Letter to Shareholders (PDF)

Read More:
Netflix expects to sign up its 100 millionth subscriber this weekend