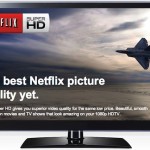 Ever since Netflix introduced its SuperHD streaming with higher quality 1080p video and 3D support at CES in January, it’s been restricted to only ISPs participating in its OpenConnect CDN program. Tonight, either there’s some kind of glitch or that participation has been expanded, because users with previously unsupported ISPs are seeing SuperHD buttons on Netflix as well. We’ve been able to confirm it and even stream SuperHD and 3D video on previously unsupported ISPs like Comcast and Verizon. There are several reports on Twitter of people suddenly seeing the option as well, and we’ve contacted Netflix to see what’s going on. So far the company has not responded, but if you’ve been waiting for some higher quality streaming options, hit the test page to see if you have the green light then try it out on a SuperHD-ready device (PS3, Roku, Apple TV, Wii U, Windows 8 and some others). [Thanks, Tim] Filed under: Home Entertainment , HD Comments Source: Netflix