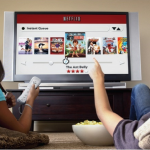 Netflix We’ve written a lot about how Netflix takes up a gigantic share of Internet traffic. During peak viewing hours, Netflix accounts for about a third of all bits sent to Internet users in North America on “fixed” connections—that is, cable, DSL, fiber, or satellite, but not cellular. But Netflix users also send a ton of data upstream, so much so that Sandvine’s latest Internet Phenomena Report puts Netflix at 9.48 percent of all peak upstream traffic on North American fixed Internet services, second only to BitTorrent’s 25.49 percent. Sandvine, a maker of equipment that helps consumer broadband providers manage network congestion, defines “peak” hours as those when network usage is within 95 percent of its daily maximum, typically from 7 to 11 p.m. It isn’t new that Netflix is both an upload and download monster. But for some reason, its share of uploads went up substantially in the latest measurement while downloads remained level. The twice-annual report had Netflix accounting for 6.44 of peak upstream traffic and 34.21 percent of downstream traffic in the first half of this year , while the newest report has Netflix at 9.48 percent of upstream and 34.89 percent of downstream: Read 17 remaining paragraphs | Comments

More:
Netflix takes up 9.5% of upstream traffic on the North American Internet