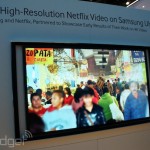 Netflix has been talking up its ability to stream Ultra HD resolution video (demonstrated at the last CES with a local video feed, as seen above), and CPO Neil Hunt reiterated those “next year” promises to Stuff.tv . Specifically, he indicated the streamer has deals to offer 4K video via embedded players on UHD TVs from several manufacturers that will be announcing them at CES. What you won’t hear about — at least immediately — is any 4K support from set-top boxes, including the two next-generation consoles, as Netflix is apparently waiting for standards (read: DRM) and HDMI 2.0 to mature first. Gigaom spotted a few test 4K videos on Netflix early in November, however they won’t play in that resolution on current hardware either. Content-wise, early adopters can expect House of Cards season two and… probably not a lot else, but that should keep everyone busy for one Kevin Spacey-filled week or so. Filed under: Home Entertainment , HD Comments Source: Stuff.tv