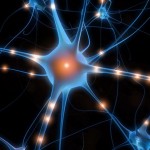 A cartoon showing spikes of activity traveling among neurons. UC Berkeley Computing hardware is composed of a series of binary switches; they’re either on or off. The other piece of computational hardware we’re familiar with, the brain, doesn’t work anything like that. Rather than being on or off, individual neurons exhibit brief spikes of activity, and encode information in the pattern and timing of these spikes. The differences between the two have made it difficult to model neurons using computer hardware. In fact, the recent, successful generation of a flexible neural system required that each neuron be modeled separately in software in order to get the sort of spiking behavior real neurons display. But researchers may have figured out a way to create a chip that spikes. The people at HP labs who have been working on memristors have figured out a combination of memristors and capacitors that can create a spiking output pattern. Although these spikes appear to be more regular than the ones produced by actual neurons, it might be possible to create versions that are a bit more variable than this one. And, more significantly, it should be possible to fabricate them in large numbers, possibly right on a silicon chip. The key to making the devices is something called a Mott insulator. These are materials that would normally be able to conduct electricity, but are unable to because of interactions among their electrons. Critically, these interactions weaken with elevated temperatures. So, by heating a Mott insulator, it’s possible to turn it into a conductor. In the case of the material used here, NbO 2 , the heat is supplied by resistance itself. By applying a voltage to the NbO 2 in the device, it becomes a resistor, heats up, and, when it reaches a critical temperature, turns into a conductor, allowing current to flow through. But, given the chance to cool off, the device will return to its resistive state. Formally, this behavior is described as a memristor. Read 4 remaining paragraphs | Comments

You Can Now Jailbreak Just About Any Kindle