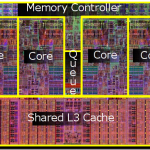 Texas A&M Supercomputing Transistors keep getting smaller and smaller, enabling computer chip designers to develop faster computer chips. But no matter how fast the chip gets, moving data from one part of the machine to another still takes time. To date, chip designers have addressed this problem by placing small caches of local memory on or near the processor itself. Caches store the most frequently used data for easy access. But the days of a cache serving a single processor (or core) are over, making management of cache a nontrivial challenge. Additionally, cores typically have to share data, so the physical layout of the communication network connecting the cores needs to be considered, too. Researchers at MIT and the University of Connecticut have now developed a set of new “rules” for cache management on multicore chips. Simulation results have shown that the rules significantly improve chip performance while simultaneously reducing the energy consumption. The researcher’s first paper, presented at the IEEE International Symposium on Computer Architecture, reported gains (on average) of 15 percent in execution time and 25 percent energy savings. Read 8 remaining paragraphs | Comments 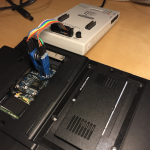