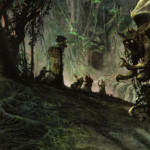 More:
New ‘Dungeons & Dragons’ site manages the rules so you can just play

Add 5TB To Your Storage Collection for $120