Enlarge / Four billion years old? You don’t look a day over 2 billion! (credit: Tashiro et al/Nature ) You could be forgiven for thinking that the remnants of the Earth’s first life don’t want to be found. Between geology and happenstance, the earliest life has certainly covered its tracks well. While paleontologists studying dinosaurs can sometimes bring an unambiguously gigantic femur home, those who study the origins of life are usually left arguing over the significance of microscopic motes of rock. A new discovery in northernmost Labrador, made by a team led by Takayuki Tashiro of the University of Tokyo, fits into that latter category. But don’t let its abstract smallness of the evidence dull your excitement. The researchers argue they have uncovered evidence that there was life on Earth more than 3.95 billion years ago—on a planet that isn’t much more than 4.5 billion years old itself. Counting carbon Some of the evidence for early life is in the form of fossilized microorganisms. It can be difficult to rule out bacterium-shaped mineral bits that can form in other ways, but research published earlier this year identified microscopic structures that seem to fit the bill in 3.7 billion-year-old rocks that were once part of seafloor hydrothermal vents. Read 10 remaining paragraphs | Comments

See the original post:
New evidence would push life back to at least 3.95 billion years ago 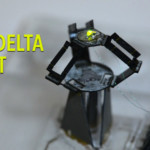 MilliDelta robot surgeon is the size of a one cent coin