Hugh Pickens DOT Com writes “New $100 bills made their debut today in the U.S. They include high tech features designed to make it easier for the public to authenticate but more difficult for counterfeiters to replicate. Those measures include a blue, 3-D security ribbon, as well as color-shifting ink that changes from copper to green when the note is tilted (PDF). That ink can be found on a large ‘100’ on the back of the bill, on one of the ‘100’s’ on the front, and on a new image of an ink well that’s also on the front. ‘The $100 is the highest value denomination that we issue, and it circulates broadly around the world, ‘ says Michael Lambert, assistant director for cash at the Federal Reserve Board. ‘Therefore, we took the necessary time to develop advanced security features that are easy for the public to use in everyday transactions, but difficult for counterfeiters to replicate.’ The bill was originally due to reach banks in 2011, but three years ago the Federal Reserve announced that a problem with the currency’s new security measures was causing the bills to crease during printing, which left blank spaces on the bills. This led the Feds to shred more than 30 million of the bills in 2012. The image of Benjamin Franklin will be the same as on the current bill, but like all the other newly designed currencies, it will no longer be surrounded by an dark oval. Except for the $1 and $2 bill, all U.S. paper currency has been redesigned in the last 10 years to combat counterfeiting.” Read more of this story at Slashdot. 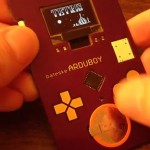 This Arduino-powered business card looks like a Game Boy and runs...