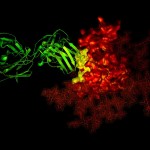 The structure of an antibody latched on to a protein found on the surface of HIV. NIAID/National Institutes of Health The dream of an HIV vaccine has been thwarted again and again because the virus evolves so rapidly that the immune system can’t keep up. But the results from a new trial in monkeys suggest that certain antibodies have a powerful enough therapeutic effect that they may warrant clinical trials. Many researchers had given up on antibodies, which are used by the immune system to identify the signature proteins on the outside of invading cells, targeting them for destruction. The HIV virus changes so rapidly that any antibodies that target the virus only work for a little while—the virus stays one step ahead while the immune system struggles to play catch-up. But researchers discovered antibodies that target the converse part of the virus’s structure—the features that are critical to its function and don’t change much over time. These antibodies were discovered in HIV-infected people whose immune systems seemed to keep most strains of HIV in check. Read 6 remaining paragraphs | Comments 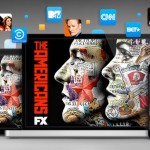