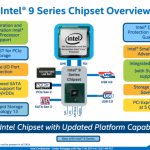 The 9-series chipsets pile a few new features on top of the previous-generation 8-series chipsets. Intel Last year at around this time, Intel was releasing its brand-new Haswell CPU architecture and its 8-series chipsets out into the world for back-to-school season. About a year before that, it was doing the same for its Ivy Bridge architecture and 7-series chipsets. This year, we’re getting more new chipsets, but they aren’t coming with a new CPU architecture—just some mildly refreshed Haswell processors, some of which we’ve covered already . We’ll get to the new chipsets in a moment, but first let’s talk about the elephant in the room: Intel’s near-silence on the next-generation Broadwell CPUs. We’ve had a few snippets of information about the company’s next CPU architecture, but since announcing a delay late last year the company has said little on the issue. Mass production was supposed to ramp up in the first quarter of 2014, and that quarter has come and gone. Read 14 remaining paragraphs | Comments 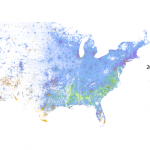 The Entire Racial Distribution of the US, Person-By-Person