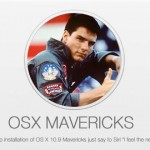 @darth News about the new release of OS X, ” Mavericks ,” is trickling out as developers and other WWDC attendees post information about it to the Internet. However, hidden a bit down in Apple’s OS X Mavericks Technology Overview document is an interesting tidbit: SMB2 is replacing AFP as the default file sharing protocol for OS X. AFP— Apple Filing Protocol —has a long pedigree that stretches all the way back to the Mac’s early days (and even a bit before that). Contemporary AFP piggybacks on top of TCP/IP for transport, but it supports a few Mac-specific things that other network file protocols don’t, like type and creator codes. These don’t matter as much as they used to, but OS X’s HFS+ file system supports a pretty rich amount of metadata, and AFP transports and preserves that metadata. But AFP isn’t particularly friendly to non-Apple systems, and no operating systems other than OS X support it natively. This wouldn’t be such a big deal, except that one of OS X’s killer features, Time Machine, only works over a LAN with destinations that support AFP. This is at least in part because of Time Machine’s reliance on Unix hard links, and also in part because it has to be able to ensure that any OS X files with HFS+ specific metadata are correctly preserved. This in turn means that third-party Time Capsule devices have to rely on reverse-engineered implementations of AFP to continue functioning, and OS X updates occasionally break third-party Time Capsule devices, sometimes for weeks. Read 3 remaining paragraphs | Comments

“Rachel” robocaller victims to get $1.7 million in refunds