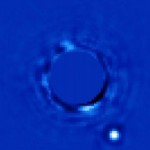 PNAS Most of the exoplanets we’ve detected have been spotted during transits, when they pass between their host star and Earth. Almost all the others have been inferred based on the fact that they gravitationally tug at their host star as they orbit around it. Very few exoplanets have been imaged directly, but that may be about to change. Earlier this week, scientists revealed the first images taken with a new instrument, the Gemini Planet Hunter, which has been installed on the (you guessed it) Gemini South telescope located in the Chilean Andes. The new hardware is so efficient that a known exoplanet that once took over an hour and considerable post-processing to image was apparent in a one-minute exposure, with no processing needed. The twin Gemini telescopes (Gemini North is in Hawaii to image the northern sky) are already some of the most advanced hardware on the planet, featuring adaptive optics that correct the gaze of an eight-meter mirror. But directly imaging a planet is a distinct challenge due to the relative brightness of the planet relative to the host star. In terms of our own Solar System, Jupiter would appear 10 9 times fainter than the Sun when imaged at a distance. Read 7 remaining paragraphs | Comments