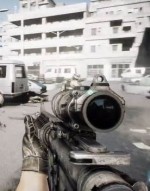 There’s an Far Side cartoon from the 1980s which shows two parents looking hopefully at their video game-playing teenager. They fantasize about his future career as a professional gamer. The joke is, of course, that this is an absurd hope for their indolent son who is developing no practical skills.

Larson’s prediction was too pessimistic. There are now people who, for money, serve as bodyguards, tutors, guides, or just plain meatshields for other online gamers. Brian Crecente hired the services of one for half an hour at the price of £5:

“Essentially,” Smith tells me, “I become the client’s buddy in the game. I won’t go for kills of my own, only when necessary to stop the client’s ‘life’ being cut short.”

And Smith was good to his word. Earlier this month I hired the teen to escort me through 30 minutes of Battlefield 3 online matches on the Xbox 360. We met up online and appeared together on the battlefield.

Smith took plenty of bullets for me, becoming a sort of human shield during the many times I wasn’t observant enough to notice an enemy drawing a bead on me. He was even more useful as an in-game guide. He was a sort of Battlefield 3 golf pro, suggesting weapons, equipment and play styles to me over headphones as we played.

One of the wonderful things about the World Wide Web is that it greatly reduces geographic barriers for building communities or businesses. If you have a specialized skill that doesn’t require physical interaction, you can stretch across the world and sell it. In fact, I’m doing that right now.