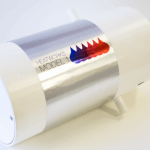 This Football-Sized Device Could Replace Your Huge Water Heater