KingofGnG writes “DICE is a small emulator dedicated to recreating on a modern computer the arcade games based on discrete circuits: ancient and bizarre entertainment machines where the electronic components required for the game experience were soldered individually on the circuit board and where there was no trace of integrated circuit or CPU. It’s an obscure and fascinating kind of emulation, and the offering of emulated games grows richer with each release.” Released a few days ago, DICE 0.8 adds support for four new games: Atari’s Crossfire and Pin Pong, and Ramtek’s Clean Sweep and Wipe Out. Read more of this story at Slashdot. 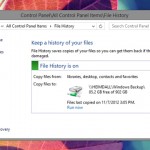 How to Use Windows 8’s New File History Backup (aka Time...