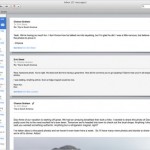 Mail in OS X 10.9. Apple Apple has just issued a patch specifically for Gmail users running Mail.app in OS X 10.9 . The 32.46MB Mail Update for Mavericks  is said to bring “improvements to general stability and compatibility with Gmail,” specifically a bug that causes unread message counts to be inaccurate, and another bug that “prevents deleting, moving, and archiving messages for users with custom Gmail settings.” The support page for the fix recommends backing up your data via Time Machine or some other mechanism before installing. You can get the update either through Software Update or by grabbing it  manually . The rumor mill says that Apple is also testing some other new features and fixes for Mavericks, most notably in an OS X 10.9.1 update designed to fix minor-but-pressing problems and a larger 10.9.2 update later on. Neither of these has appeared in Apple’s standard developer portal as of this writing, but given that Apple has followed this pattern for every single version of OS X to date, it’s not exactly a stretch of the imagination. Apple also released version 1.0.1 of iBooks for OS X today, which includes some non-specific “bug fixes and improvements to performance and stability.” Read on Ars Technica | Comments

Read this article:
New update from Apple gets Mavericks and Gmail to play nice