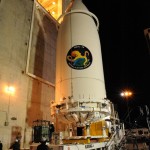 United Launch Alliance via ODNI President Obama is out to put the public’s mind at ease about new revelations on intelligence-gathering, but the Office for the Director of National Intelligence can’t quite seem to get with the program of calming everyone down. Over the weekend, the ODNI was pumping up the launch of a new surveillance satellite launched by the National Reconnaissance Office. The satellite was launched late Thursday night, and ODNI’s Twitter feed posted photos and video of the launch over the following days. Read 4 remaining paragraphs | Comments