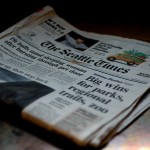 YoungToymaker In 2007, the FBI wrote a fake news story about bomb threats in Thurston County, Washington, and then sent out e-mail links “in the style of the Seattle Times .” The details have now been published by that very same newspaper , which today carries a story including outraged quotes from a Seattle Times editor. The FBI put an Associated Press byline on the fake news story, which was about the bomb threats in Thurston County that they were investigating. “We are outraged that the FBI, with the apparent assistance of the US Attorney’s Office, misappropriated the name of The Seattle Times to secretly install spyware on the computer of a crime suspect,” said Seattle Times  editor Kathy Best. “Not only does that cross a line, it erases it.” Read 10 remaining paragraphs | Comments

A bunch of Apple services are down, it’s not just your...