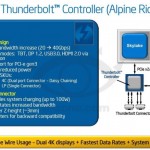 The leaked slide that purports to out the next-generation Thunderbolt controller. VR-Zone Thunderbolt 2 just started showing up in devices late last year, but a new slide leaked by VR-Zone is giving us our first glimpse at what the next version is going to look like. Dubbed “Alpine Ridge,” the new Thunderbolt controllers will double Thunderbolt 2’s bandwidth from 20Gbps to 40Gbps, will reportedly support PCI Express 3.0, and will reduce power usage by 50 percent compared to current controllers. The downside is that the new version will require the use of a new connector—it supports charging for devices that use up to 100W of power and it’s 3 mm shorter than current connectors, but adapters will be required to maintain compatibility with older Thunderbolt accessories. Doubling the available bandwidth will enable next-generation Thunderbolt controllers to drive two 4K displays simultaneously, where current controllers can only drive one. The new controllers will allegedly be compatible with a variety of other protocols as well, including DisplayPort 1.2, USB 3.0, and HDMI 2.0. Intel will offer two different versions of the controller—a version that uses four PCI Express lanes to drive two Thunderbolt ports and an “LP” (presumably “Low Power”) version that uses two PCI Express lanes to drive one port. This is consistent with the current controllers. High-end devices like the Mac Pro and Retina MacBook Pro use two-port controllers, while lower-end, lower-power devices like the Mac Mini and MacBook Air use the one-port version. Thunderbolt 2 gave the specification a performance boost but didn’t change all that much about the protocol. It combined the original Thunderbolt’s two 10Gbps channels to allow for higher maximum speeds, but it didn’t increase the total amount of bandwidth available or introduce any new protocols. The upside is that it maintained full compatibility with all of the original Thunderbolt cables and accessories, something that this next-generation Thunderbolt controller won’t be able to do without adapters (though to be fair, USB 3.1 and the new Type-C USB connector have the same problem). Read 2 remaining paragraphs | Comments