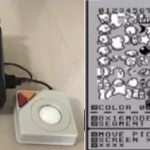 Nintendo programmer Masahiro Sakura coded the Game Boy classic Kirby’s Dream Land on a cartridge-based Famicom console and Disk System that lacked a hardware keyboard. According to a recent presentation given by Sakura, “values had to be input using a trackball and an on-screen keyboard.” Sakura, who was 20-years-old at the time, said he just thought that was “the way it was done.” From Game Watch’s report in Japanese, translated by Source Gaming : At the time, the development tool that HAL Laboratory was using was the Twin Famicom, a console that combined the Famicom and the Famicom Disk System. A trackball made specifically for the Twin Famicom was used with the machine, which read and wrote data to a floppy disk and uploaded data to the floppy disks [during development]. Essentially, they were using a Famicom to make Famicom games. Sakurai told the crowd, “It’s like using a lunchbox to make lunch”. However, because of that, they were able to create a functional test product before the project plan was even completed. (via Ars Technica )