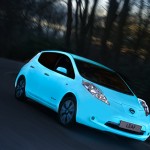 Oh, Nissan, you tease. The company has just coated a Leaf EV with some custom-made glow-in-dark paint , which can apparently last for up to 25 years — but it has no plans (not yet, anyway) to make it available for purchase. Nissan partnered with glow-in-dark pavement creator Hamish Scott to concoct a special paint as a symbolic representation of how Leaf inspires its owners to convert to solar energy. It’s easy to find glow-in-the-dark paints these days, of course, and you can even do Tron-like designs on your car if you want, but the company claims the one it mixed up isn’t like any other. The secret formula apparently uses organic materials, including an ingredient called Strontium Aluminate . This concoction absorbs energy from the sun during the day, which gives it power to glow at night for up to 10 hours. A glowy Leaf certainly sounds like it’ll go well with glow-in-the-dark roads ; not to mention, it looks a lot tougher to steal. As we’ve mentioned, though, you can’t waltz into a dealership and demand one ASAP, so you’ll just have to make do with watching it on video for now. Filed under: Transportation Comments Source: Nissan

More:
Nissan has a glow-in-the-dark Leaf EV, but you can’t buy one

Optical Data Storage Squeezes 360TB on to a Quartz Disc—Forever