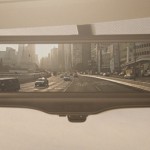 Rearview mirrors aren’t always as useful as you might like — bright headlights, weather or a basketball team in the back seats can make it tough to see what’s behind you. None of those should be a problem once Nissan’s new Smart rearview mirror reaches cars, though. The peripheral blends a traditional mirror with both an LCD and a rear camera that compensates for bad lighting. Flick a switch and the camera system takes over, giving you a clear view of traffic no matter the road conditions. The smart mirror will first show up in the ZEOD RC Le Mans racer, and Nissan plans to make it an option for everyday cars starting with Japan this spring. Drivers worldwide will get it in 2015. That’s just the start of the automaker’s plans, however. Since the smart mirror is as effective as a large rear window, Nissan expects the technology to influence car design; you may see more aerodynamic vehicles now that there’s less need for glass. Filed under: Transportation Comments Via: SlashGear Source: Nissan

Why Dubstep Comes From the Future

A Hiker Stumbled Across This Incredibly Rare 2,000-Year-Old Gold Coin