We don’t see it in the FCC database yet but Notion Ink’s charming Rohan Shravan just penned a post on the company’s blog with news that Adam has official clearance from the US government. That’s right, after several delays the tiny startup will finally condense its occasionally vapory molecules into a solid slab of shipping tablet starting “around Wednesday” after the hardware receives its FCC tattoo. 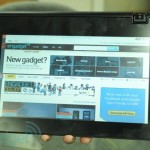