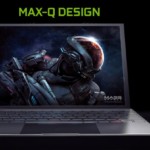 Based on NVIDIA’s 2017 Computex announcements, PC gamers won’t have to choose between bulky gaming laptops and desktop-level processing power for much longer. A new design called “Max-Q” is arriving in new laptops that it claims are both 3x thinner and 3x more powerful than their predecessors — think 18mm thick, 5 pounds and with the power of NVIDIA’s GTX 1080 inside. Plus, there’s “WhisperMode, ” which can pace the game’s framerate to keep the laptop cool and quiet during a plugged-in gaming session. When the new laptops roll out beginning June 27th , the top of the line options well outpace current options like Razer’s GTX 1060-powered 4K Blade . There aren’t specific benchmarks listed, but a graph on the official website claims an average 1.8x performance increase over GTX1060 when running “AAA” titles at 4K. During the demo, CEO Jen-Hsun Huang showed off a 5-lb laptop running Project Cars 2 , saying it was 60 percent faster than the PS4 Pro. NVIDIA says that they’re not only engineered to be thin and light across the “chip, drivers, thermal and electrical components, ” but that its software optimizes settings and the workload across CPU/GPU to regulate power and heat. They aren’t all super powerful however, with models on the way from “Acer, Aftershock, Alienware, ASUS, Clevo, Dream Machine, ECT, Gigabyte, Hasee, HP, LDLC, Lenovo, Machenike, Maingear, Mechrevo, MSI, Multicom, Origin PC, PC Specialist, Sager, Scan, Terrans Force, Tronic’5, and XoticPC, ” they will include GTX 1060, 1070 and 1080 level GPUs inside. Source: NVIDIA Blog , NVIDIA