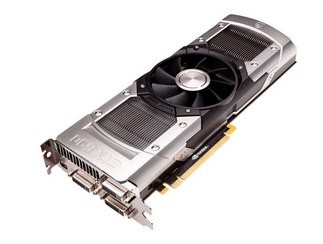 Would you look at that? NVIDIA hinted it would be coming today, and it looks like the tease is living up to the hype. The company stormed into the weekend at its Shanghai Game Festival by unleashing its latest offering, the GeForce GTX 690 — and oh yeah, it’s packing two 28nm Kepler GPUs! Trumping the recently released GTX 680 as the “worlds fastest graphics card,” it’s loaded with a whopping 3,072 Cuda cores. The outer frame is made from trivalent chromium-plated aluminum, while you’ll find thixomolded magnesium alloy around the fan for vibration reduction and added cooling. Aiding in cooling even further, the unit also sports a dual vapor chamber and center-mounted fan. It’ll cost you a spendy $1,000 to pick up one of these puppies come May 3rd, and you’ll likely be tempted to double up — two can run together in SLI as an effective quad-core card. With that said, NVIDIA claims that a single 690 runs 4dB quieter and handles about twice the framerate as a duo of GTX 680s in SLI — impressive, but we’ll reserve judgement until we see it for ourselves. Check out the press release after the break if you’d like more information in the meantime (…and yes, it runs Crysis — 2 Ultra to be exact — at 57.8fps, according to NVIDIA).

[Thanks to everyone who sent this in]