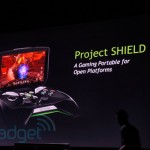 A video shown on-stage during NVIDIA’s press conference just unveiled “Project Shield,” a gaming controller / portable console running the just announced Tegra 4 . The controller looks an awful lot like a PlayStation 3 DualShock 3, albeit with an HD screen attached. NVIDIA’s promising 38 hours of gaming out of the rechargeable lithium ion batteries built-in, a swanky audio system “on par with” jamboxes, and a full-on Android gaming experience. A micro SD sits next to an HDMI output, one USB port, and a standard eighth inch audio jack, directly below the customizable 5-inch “retinal display” touchscreen. Update : It’s a 1,280 x 720 screen at 294 dpi, for the record. NVIDIA’s hoping Shield will replace your average controller as well — perhaps with that newly detailed Grid system ? — and company CEO Jen-Hsun Huang showed off its use in-tandem with a swanky LG 4K television on-stage, navigating through media without pause. He also gave us a taste of a few games running on it ( Blood Sword: Sword of Ruin and a boxing title) via NVIDIA’s Tegrazone gaming store. But beyond just Android games we’ve already seen, still-in-development Unreal Engine 3 title Hawken was also given a multiplayer run, and looked notably more attractive than the previous two titles. As good as the handheld’s newfangled Tegra 4 chip seems to be, it still can’t hold a candle to Nvidia’s own GTX 680 — Huang explained that the Shield can play more than just Tegrazone games — it can take over your gaming PC, too. He explained that Nvidia’s GeForce Experience software can pipe PC gaming to the handheld over your local network, giving Shield owners access to their Steam library ( navigatable by Big Picture Mode , of course) directly from the device. It looks like users will be able to purchase PC games through Tegrazone, too. Huang showed the crowd Need for Speed: Most Wanted running in real-time on the device. It’s … well, it’s really impressive. There’s little (if any) perceptible lag, and this is a racing game we’re seeing (as in that lag really matters). The next game up is Assassin’s Creed 3 , which looks similarly impressive on the Shield’s 5-inch screen. Finally, we’re seeing Steam launched directly from Tegrazone, and it launches directly into Big Picture Mode. Beyond just playing games via streaming, it looks like we’ll be able to buy them directly on Steam, through Shield. We’ll be getting a closer look at Project Shield later this week, and we’ll be sure to put it through its paces. Oh, and we’ll ask for a price and release window, as we’ve yet to hear official word on either . Can’t wait? Tide yourself over with NVIDIA’s official press release after the break. Update 2: NVIDIA tells us Project Shield’s roughly in the beta stage of development, and currently doesn’t include an LTE radio (WiFi only). It’s running Jelly Bean at the moment, but may change by the time it’s expected to ship, in “Q2 2013.” Still no word on pricing, sadly. Gallery: NVIDIA Project Shield Joseph Volpe and Sean Buckley contributed to this report Continue reading NVIDIA unveils Project Shield, a Tegra 4-powered Android gaming handheld Filed under: Gaming , Handhelds , HD , Mobile , NVIDIA Comments