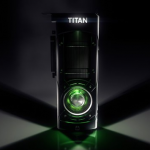 NVIDIA just announced the Titan X , its latest powerhouse graphics card, at Epic Game’s GDC session this morning. And boy, it sounds like a monster: According to NVIDIA CEO Jen-Hsun Huang, it’s now the world’s most powerful GPU with more than 8 billion transistors (a bit of a jump from the 7 billion in last year’s Titan Z). Titan X is powered by the company’s new Maxwell architecture, and it packs in 12 gigabytes of VRAM, just like the Titan Z. NVIDIA isn’t revealing much else about the new GPU yet — it has its own conference in a few weeks, after all — but at this point it sounds like the video card we’ll all be pining for this year. While it may seem strange for Huang to tease the Titan X at another company’s event, he had a good reason: It’s powering a new VR experience called Thief in the Shadows , a joint effort between Epic, Oculus, and Weta Digital, which puts you in the shoes of someone exploring the dragon Smaug’s treasure-filled cave from The Hobbit. Don’t miss out on all the latest from GDC 2015! Follow along at our events page right here . Filed under: Gaming , NVIDIA Comments Source: NVIDIA

Kevin Smith announces that his final directorial effort will be Clerks...