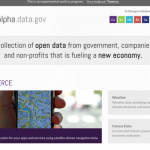 Alpha.data.gov, an experimental data portal created under the White House’s Open Data Initiative. Data.gov President Barack Obama issued an executive order today that aims to make “open and machine-readable” data formats a requirement for all new government IT systems. The order would also apply to existing systems that are being modernized or upgraded. If implemented, the mandate would bring new life to efforts started by the Obama administration with the launch of Data.gov four years ago. It would also expand an order issued in 2012 to open up government systems with public interfaces for commercial app developers. “The default state of new and modernized Government information resources shall be open and machine readable,” the president’s order reads. “Government information shall be managed as an asset throughout its life cycle to promote interoperability and openness, and, wherever possible and legally permissible, to ensure that data are released to the public in ways that make the data easy to find, accessible, and usable.” The order, however, also requires that this new “default state” protect personally identifiable information and other sensitive data on individual citizens, as well as classified information. Broadening the “open” mandate The president’s mandate was initially pushed forward by former Chief Information Officer of the United States Vivek Kundra. In May of 2009, Data.gov launched with an order that required agencies to provide at least three “high-value data sets” through the portal. Read 6 remaining paragraphs | Comments