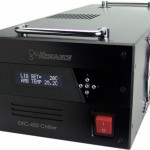 Palmer Luckey, the co-founder of Oculus VR and creator of the Oculus Rift, somewhat unsurprisingly, is a fully paid-up member of the PC Master Race . During a recent Reddit AMA , Luckey was asked about the hardware specs of his PC. The first part of his response was to be expected, and probably straight out of the company’s PR playbook: I have lived on the bleeding edge of PC hardware for as long as I could scrape the money together, but for VR, I am sticking to hardware that sticks to our recommended specs: https://www.oculus.com/en-us/oculus-ready-pcs/ That way, I get the same experience as most of my customers. I don’t want to become disconnected from the reality of how our hardware and software performs. On the side, though, Luckey is working on something just a little bit more exciting: Read 4 remaining paragraphs | Comments