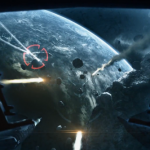 EVE:Valkyrie is no longer just a neat proof-of-concept demo for Oculus’ prototype VR headset — it’s now an exclusive launch title . Today, Oculus announced that it’d be entering into a co-publishing agreement with developer CCP Games to make its space dogfighter one of the Rift’s first AAA “made-for-VR” games. That Oculus would seek to back EVE:Valkyrie in this way shouldn’t come as much surprise to those following the nascent VR outfit’s saga. The two companies have had a closely intertwined relationship that reaches back to Oculus’ Kickstarter days. So when CCP revealed plans to develop the VR shooter as a standalone title within its EVE Online universe back in August of last year — previously a go-to demo for the Rift — it seemed likely the title was destined for Oculus. At the time, CCP had even mentioned 2014 as a target for the games’ commercial release, a date which coincided neatly with the same vague release window Oculus had set for a commercial launch of the Rift. Filed under: Gaming Comments Source: Oculus VR

How a human lung is kept alive and breathing for a...