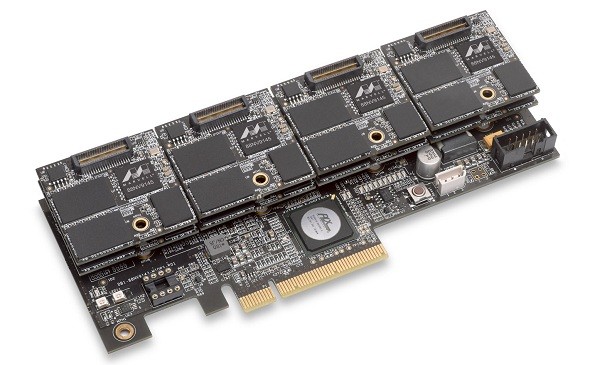 We’ve barely digested the carb-rich Z-Drive R4 and already OCZ wants to flaunt the next in its series of enterprise PCIe SSDs. The R5 sports an entirely new ‘Kilimanjaro’ controller platform (shown in the reference design above), developed in cahoots with Marvell and incorporated into each and every flash module that you might wish to add to the base card. These scalable controllers communicate directly with the host system, removing the need for an extra SATA RAID chip and thereby promising greater speeds — especially as you pile on more modules. We won’t get full specs until CES, but in the meantime OCZ has hinted at a doubling of the SandForce-based R4’s performance, which could take us into the three million IOP realm. So long as the company also tackles the question of reliability on this new type of drive, then it’ll likely be an easy sell. Check out the source link for more.

OCZ details Z-Drive R5 enterprise SSD, reckons it doubles speed of the R4 originally appeared on Engadget on Fri, 06 Jan 2012 10:46:00 EDT. Please see our terms for use of feeds.