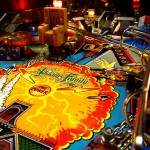 Ask pinball fans about classic tables and they’ll probably mention The Addams Family . It was widely available, well-designed and full of technological firsts, such as computer-controlled flippers. However, it hasn’t been recreated in software in its 22-year history — something FarSight Studios hopes to fix with a crowdfunding project to reproduce the table in Pinball Arcade . So long as the developer reaches its funding goal, you’ll get to play the Addams Family almost as if you’d stepped into an arcade circa 1992. The smart flippers, actors’ voices and Thing’s creepy animatronic hand should all remain intact. Thankfully, it doesn’t cost much to contribute and (hopefully) keep this vintage machine alive. Pledging $7 will get you access to the table on one of the platforms Pinball Arcade supports, including most mobile devices, consoles and PCs. It only costs more if you want more platforms or special access, including the behind-the-scenes menu (if you pay $15) or the coveted Special Collectors Gold Edition ($100). The digital Addams Family won’t arrive until February if all goes according to plan, but that’s a trivial wait if you’ve spent ages yearning for a version of the table that you can afford to take home. Filed under: Gaming Comments Source: Kickstarter

Visit site:
One of the greatest pinball tables ever is going digital with your help