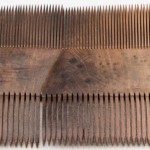 It wasn’t exactly what divers searching for sunken ships expect to find. When the Texel Divers Club glimpsed a package in the sand-buried remains of a sunken ship off the island of Texel in the Wadden Sea, they brought it to the surface—only to discover it held a wealthy lady’s most prized possessions : a silk damask dress, velvet embroidered purse, perfume ball, lice comb, stockings, and books bound in beautiful leather. Kaap Skil Museum A lice comb made from cow horn. 6 more images in gallery Preserved beneath a layer of sand since the 17th century, the dress was probably for everyday wear and was of a style frequently seen in paintings from the late Renaissance. Made of rich silk damask, it likely belonged to a woman of the upper classes. Despite its fanciness, experts believe it was for everyday wear because it wasn’t beaded or embroidered with golden or silver threads. The woman’s books were stamped with the emblem of King Charles I, of the Stuart royal family from England, which suggests she may even have been royalty. It’s exceedingly rare to find such a well-preserved collection of textiles and makes this find one of the most important of its kind in Europe. The find is also a boon for historians who want to understand what everyday life was like during this era. What we see in paintings is not always an accurate record of people’s lives. Finding this cache of typical (albeit expensive) clothing verifies that privileged women of the era really did dress in the ways we might expect and carry tiny metal balls of scented, dried flowers to mask body odors that would have been common in a culture where people didn’t bathe very often—and never got any medical remedies for all the funguses and bacterial infections that flourish on human bodies. Read 2 remaining paragraphs | Comments

Read More:
One of the “most important” shipwreck treasures ever discovered

Comcast sued by customers for turning routers into public hotspots