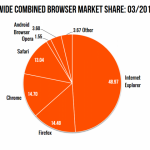 Windows XP will receive its last ever security update on April 8th next week. After that, any flaws, no matter how severe, will not be patched by Microsoft, and one would be well advised to not let Windows XP machines anywhere near the public Internet as a result. In spite of this, 28 percent of Web users were still using the ancient operating system in March. This seems unlikely to end well. Net Market Share Net Market Share Chrome has come close to Firefox’s market share a number of times over the years. However, the market share tracker we use, Net Market Share, has never seen Google’s browser actually surpass Mozilla’s—until now. In March, Chrome finally overtook Firefox to claim the second spot. Internet Explorer dropped a quarter of a point, Firefox dropped 0.42 points, and Chrome reaped the reward, gaining 0.68 points. Safari was essentially unchanged, up 0.01 points; likewise Opera, dropping 0.03 points. Read 4 remaining paragraphs | Comments

More:
One week before its end of life, 28 percent of Web users are still on Windows XP