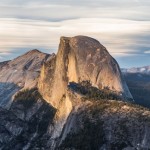 Photo by DAVID ILIFF. License: CC-BY-SA 3.0 This morning at Apple’s 2014 Worldwide Developer’s Conference, Apple SVP Craig Federighi gave us our first official look at the upcoming version of the Macintosh desktop operating system. This is the tenth formal release of OS X (which is pronounced “oh ess ten,” never “oh ess ecks”); Apple’s naming convention uses “OS X” as the brand, separate from the version, and so the brand and version of this release is indeed “OS X 10.10″—”oh ess ten ten dot ten” (or “ten point ten,” if you insist). Starting with OS X 10.9, though, Apple has given the OS California-themed names—10.9 was “OS X Mavericks,” after a famous surfing location, and this new version is “OS X Yosemite,” named after California’s Yosemite National Park. Mavericks’ branding and banners were all wave-related, after the surf theme; Yosemite’s desktop features the famous slab-sided southwest face of Half Dome , one of the park’s most recognizable rock formations. (PC gamers who cut their teeth in the late 80s and 90s will also recognize Half Dome from its role as the logo of the legendary adventure gaming company Sierra On-Line .) Translucency and new Dock icons. “Translucency” is the name of the day, with trandlucent panels and sidebars popping up all in all windows. The icons in the Dock have also gotten a big overhaul, gaining a very iOS-like appearance across the board. “You wouldn’t believe how much time we spent crafting that trash can,” joked Federighi. The revised interface can also be shifted to a “dark” mode, where windows and menus shift to light text on a smoky background instead of the Mac’s more typical black-on-white. Read 6 remaining paragraphs | Comments

Why Cloud Infrastructure Pricing Is Absurd