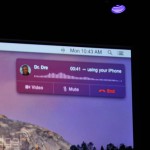 As part of OS X Yosemite’s focus on creating a more seamless experience between your Mac and iOS devices, Apple’s updating iMessage to keep conversations going. Now it’s not just instant messages from other Apple devices that show up on the desktop app, but texts and multimedia that’ve been sent from other platforms, too (texts from your friends’ Android devices, for example). Oh, and you can now make and take regular phone calls from your Mac when your iPhone is in range. Part of the new “hand-off feature” that means your computer and iDevice know exactly what the other is doing, if someone calls your phone, you’ll see a pop-up asking if you want to answer right from your computer. It works the other way, as well, so you can make calls without touching your phone. And, what better way to show off the new feature than to call Dre live on stage. Show-offs. Messaging has received some TLC in the upcoming iOS 8 update, too. Word predictions across iMessage, Mail, etc. will take the person you’re talking to into account — expecting your vocabulary will be more formal with your boss than with your buddies. All the data that goes along with smart predictions will be stored locally, by the way. Group threads are a bit more malleable, allowing you to add or remove people from the conversation, yourself included. You can also share your current location to a message group. A spirited back and forth annoying you while you’re trying to work? Well, turning Do Not Disturb on for that individual thread means you can stop notifications from that conversation, but allow everything else to get through. Probably the most important new feature is the addition of voice and video messaging. And, to respond to a voice message with one of your own, you simply raise the iPhone to your ear and start talking. To stop threads full of audio and video hogging all your internal memory, these kind of messages will self-destruct, Snapchat-style. Unless you specifically choose to save them, that is. Filed under: Cellphones , Desktops , Laptops , Mobile , Apple Comments

View article:
OS X Yosemite will let you answer calls to your iPhone from your Mac 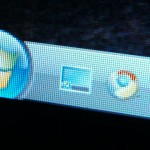 The Start Button Is Coming Back to Windows