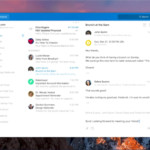 Outlook on computers can be overwhelming, to put it gently. The interface is loaded with buttons you probably aren’t using, and it generally isn’t as intuitive or fluid as the mobile and web versions . Thankfully, Microsoft knows this — and it’s planning a revamp that could give the email and calendar app a breath of fresh air. Microsoft recently previewed Outlook redesigns for Mac and Windows that are nearly as clean and intuitive as their mobile counterparts. You can still have a customizable “ribbon” at the top, but it’s stripped down and less intimidating to newcomers. The navigation panel (on the left) also takes its cues from Outlook’s mobile apps, making it much easier to switch folders or entire accounts. Mac users may notice the difference the most. This time around, Microsoft is aiming for an “authentically Mac” look instead of shoehorning the Windows interface into a Mac app. This won’t matter much if you’re interested in features above all else, but it could help you adjust if you’re switching from Apple Mail or another Mac-native email program. There’s no mention of when the new Outlook will hit your PC, although it wouldn’t be surprising if Microsoft rolls this into Office 2019’s release next year. Whenever it arrives, it’ll reflect how much Microsoft’s software priorities have changed in the past few years. Where Outlook’s desktop version has largely focused on business users circulating memos and scheduling meetings, it now has to court home users who may just be looking for an app similar to what they have on their phones. Microsoft’s challenge will be to please these relative newcomers without alienating the corporate crowd. Via: MSPowerUser , The Verge Source: Microsoft Ignite (YouTube)