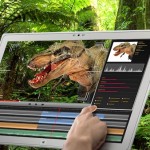 We got our first peek at Panasonic’s 4K Toughpad tablet last January at CES, and now the company says it will go on sale in the US about a year later, for $5, 999. Panasonic announced two devices for Europe , but here in the US there’s only the higher end UT-MB5 that packs Windows 8.1, 8GB of RAM, a 256GB SSD, Intel Core i5 CPU and, oh yeah — that super high res 3, 840 x 2, 560 LCD. With a projected two hour battery life you probably won’t be using this on the go very often (there’s an optional desktop cradle and carrying case), but even with its incredible 20-inch size, it’s about .49-inches thick and weighs 5.27 lbs. If you’re a professional in the “video production, architecture, design, photography and healthcare” fields who can expense this six thousand dollar slate, you’re probably already sold — all others can check after the break for a demo video and more specs. Filed under: Desktops , Tablets Comments Source: Panasonic