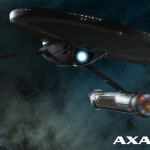 Lawyers from Paramount/CBS have been pursuing the makers of a crowdfunded Star Trek fan film , Axanar , for months , but according to JJ Abrams, they’re finally going to back off. Abrams made the announcement at an event last night on the studio’s movie lot where the studio dedicated a street to the memory of Leonard Nimoy, premiered the second trailer (which you can watch below) for Star Trek: Beyond, showed about 15 minutes of footage from the movie, and announced plans to screen the flick on an outdoor IMAX screen at Comic-Con. At the Star Trek Beyond fan event JJ Abrahms announced that because of Justin Lin, Paramount was dropping the lawsuit against Axanar. — Axanar Productions (@StarTrekAxanar) May 21, 2016 According to Abrams, the movie’s director Justin Lin heard about the lawsuit, was personally troubled as a fan and pushed for a resolution. As you can see in the Periscope stream embedded below from Trek.fm , he said that in the next few weeks it will be announced that the lawsuit is going away. Now, in a statement to Buzzfeed reporter Adam Vary , CBS/Paramount lawyers have said that they are in settlement talks and plan to set up guidelines for future fan films. All in all, it’s probably a good call to stop antagonizing the fanbase before releasing a new movie, so it’s not too surprising that all of this news came at once. Breaking News: Star Trek Axanar lawsuit is going away… pic.twitter.com/Sgc8K983BO — Trek.fm (@trekfm) May 21, 2016 Via: Deadline Source: Axanar Productions (Twitter) , Axanar (Kickstarter) , Trek.fm (Twitter)

Read the article:
Paramount will end its lawsuit against ‘Star Trek’ fan film

Women Interviewing For Tech Jobs Actually Did Worse When Their Voices...