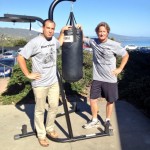 FindTheBest CEO Kevin O’Connor and Director of Operations Danny Seigle. FindTheBest When Santa Barbara startup FindTheBest (FTB) was sued by a patent troll called Lumen View last year, it vowed to fight back rather than pay up the $50,000 licensing fee Lumen was asking for. Company CEO Kevin O’Connor made it personal, pledging $1 million of his own money to fight the legal battle. Once FindTheBest pursued the case, the company  dismantled the troll in short order. In November, the judge invalidated Lumen’s patent, finding it was nothing more than a description of computer-oriented “matchmaking.” At that point, FindTheBest had spent about $200,000 on its legal fight—not to mention the productivity lost in hundreds of work hours spent by top executives on the lawsuit, and three all-company meetings. Read 10 remaining paragraphs | Comments