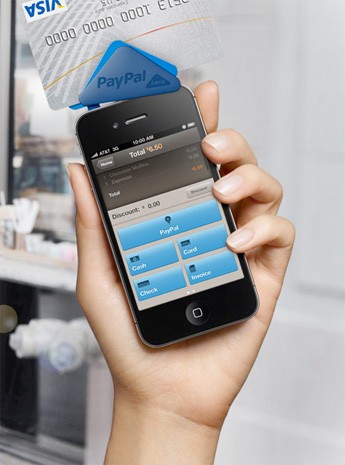 Hear that? That’s the sound of coins hitting the mental floor at a breakneck pace, and if PayPal’s meteoric success is any indication of how it’ll do in mobile… well, stockholders should be pleased. Nearly three years after first hearing of Jack Dorsey’s Square (formerly ‘Squirrel‘) project, the most hated division of eBay is coming out with a rival. President and CEO of eBay John Donahoe took the wraps off of the device at Ghirardelli Square in San Francisco today, with an aim to bring PayPal to “merchants in the offline world.” The plastic triangle module plays a familiar role: pop it into an iPhone, load up an app and swipe until you just can’t sell anything else. We’re hearing that PayPal will charge merchants 2.7 percent (just 0.05 percent less than Square), but further details — and even the thing’s name — are still developing.

As much as we jest about PayPal‘s polarizing nature, we’ve been victim to one too many unjustified account freezes to become overly joyous here, but we won’t kvetch about a little competition. Here’s hoping we see rates and fees on the decline thanks to another major player stepping up to bat, but something tells us those kinds of dreams are dreamt only by fools. That aside, the fact that famed designer Yves Behar (profiled here on The Engadget Show) and Fuseproject were tapped to engineer it gets a major thumbs-up from us.

Update: Looks like it’ll go by the name Here. PayPal Here. Moreover, the hardware and app will be gratis, and shipments will begin to go out in the US, Canada, Hong Kong, and Australia today. Everyone else will need to sit tight for a few weeks, and we’re still digging for information on compatibility beyond the iPhone.

Update 2: Look like Android support will be here at launch, but iOS devices will need to run iOS 4.0 or higher.

PayPal Here mobile card reader: it’s like Square, but with way more frozen accounts originally appeared on Engadget on Thu, 15 Mar 2012 13:38:00 EDT. Please see our terms for use of feeds.