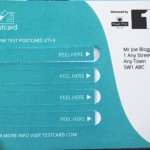 Among the many startups on display at the TechCrunch Disrupt hall in San Francisco this week are companies focused on health and biotech. The products ranged from smart exercise bikes to breast pumps that look like they’re from a science-fiction film. One of them, however, stood out from the rest with a large sign that simply read “Take the piss, ” with the last word in big bold letters. The company is called Testcard , and it claims to tell you if you have a urinary tract infection just by peeing on a postcard. It’s just one of many medtech startups vying for legitimacy in an increasingly crowded field. The postcard comes with four different pull-out tabs, and each tab is equipped with a QR code as well as three tiny square pads, each with a different color. You then either pee on the tab — or, as Testcard would recommend, dip the tab in a cup you’ve already peed into — and the three tiny squares may or may not change in color. After that, you then use the companion Testcard app to scan the QR code and then align the colored squares with the in-app camera. Within about 20 seconds, the app will let you know if you have a urinary tract infection or not. Testcard is also working on different postcards to test pregnancy (it’ll even tell you how far along you are) and sexually transmitted infections as well. Dr. Andrew Botham, Testcard’s co-founder, explains how it works: “The app uses the camera as a colorimeter, ” he says. “It converts the color to a signal, and then compares to an internal calibration curve for the test substance.” A pregnancy test, on the other hand, would measure density rather than color. It compares the test response to a control, which then approximates how pregnant the person is. According to Botham, the tests here are very similar to the kinds you would take in an office — a doctor testing for UTI would also be comparing your results to a color chart, for example — except the postcards are more accessible, especially to those who live far away from clinics and hospitals. “Point-of-care testing has never been able to show improved patient outcomes, ” says Botham. “I feel this is because it is being done in doctors’ surgeries and clinics, and at this point, patients are already being managed.” The key, he says, is to make testing like this more convenient, so that those concerned can take the tests in the privacy of their own home. Testcard sounds like a really interesting idea, but as with any medtech startup these days, it’s probably wise to approach it with a healthy dose of skepticism. As we’ve seen with Theranos , for example, sometimes these claims amount to nothing more than snake oil. Accusations of pseudoscience have even permeated the field of genetics testing — sure, services like 23andMe and Helix can offer an interesting insight into your genetic past, but the results aren’t always conclusive. Plus, while FDA clearance has been awarded to certain disease-assessment DNA tests, the ones that focus on giving diet and fitness advice aren’t given the same level of scrutiny. For Testcard’s part, Botham tells me it’s still in a pre-regulatory phase. It’ll launch next year through clinical trial testing in certain laboratories in the UK as it seeks regulatory approval. This way, he says, the company can still make revenue while undergoing testing — the app itself is free, but each postcard will cost around $3 (the pricing is not yet final). Plus, the clinical trials will be a great way to figure out what’s working and what’s not. When asked about how Testcard can differentiate itself from Theranos and learn from its mistakes, Botham says that its product is already proven. “The revelation is not in the technology, it’s in the accessibility, ” he says. “We are pushing laboratory grade testing into the home.”

View article:
Pee on a postcard to determine if you have a UTI